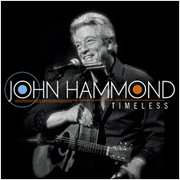 TIMELESS (January 2014)
John’s newest album, Timeless, marks his 50th year as a recording artist. Fittingly, it was namedBest Acoustic Blues Album at Annual Blues Music Awards on May 7, 2015. The new CD adds to an already incredible career, having released thirty-five solo albums since 1964’s Big City Blues.Timeless, following on the heels of 2010’s Grammy nominated CD Rough and Tough, was recorded live at Chan’s in Woonsocket, RI (one of Hammond’s favorite venues in the world). The album honors a host of legendary and hugely influential blues artists including Chuck Berry, Elmore James, Howlin’ Wolf and Bobby “Blue” Bland, as well as the living legend and longtime collaborator and friend of Hammond’s, Tom Waits.
Buy from: Amazon.com   iTunes

“John’s sound is so compelling, complete, symmetrical and soulful with just his voice, guitar and harmonica, it is at first impossible to imagine improving it… He’s a great force of nature. John sounds like a big train coming. He chops them all down.” – Tom Waits

“John Hammond is a master… He is a virtuoso. A Conjurer… A Modernist… John is in a very small circle of men with a guitar and a harmonica. Jimmy Reed, Howlin’ Wolf, Bob Dylan. The guitar is an orchestra. He’s sending messages. Storytelling. All mystery. Protection. The language goes out through the night… The Big Boom. Boom the room.” – T Bone Burnett

Host of the BRAVO TV special and Sony Home Video, The Search for Robert Johnson

After 35 years into a career that spans 35 albums recorded for seven labels, you’d think John Hammond might get a little complacent. Thankfully the opposite is true, as 2001’s Wicked Grin is the artist’s most daring musical departure and arguably greatest achievement to date. Mining the rich Tom Waits catalog for 12 of its 13 tracks (the closing is a traditional gospel tune) and bringing Waits himself along as producer has resulted in a stunning collection that stands as one of the best in Hammond‘s bulging catalog. Never a songwriter, the singer/guitarist/harmonica bluesman has maintained a knack for picking top-notch material from the rich blues tradition without resorting to the hoary, over-covered classics of the genre. It’s that quality that transforms these tunes into Hammond songs, regardless of their origin. His history of working with exceptional session musicians is also legendary, and this album’s band, which features Doug Sahm sideman Augie Meyers on keyboards, harmonica wizCharlie Musselwhite, longtime Waits associate Larry Taylor on bass, and Waits himself poking around on various songs, is perfect for the spooky, swampy feel he effortlessly conjures here. Choosing from a wide variety of Waits‘ material, Hammond infuses these unusual tracks with a bluesman’s spirit and a crackling energy that practically reinvents the songs, instilling them with an ominous, rhythmic swampy feel. The producer contributes two new tracks (“2:19” and “Fannin’ Street,” the latter is the album’s only acoustic cut) that maintain the creepy but upbeat voodoo spirit that trickles and twists throughout. Hammond sings with a renewed spirit, adding a smoother but no less intense edge thanWaits‘ typical rusty razor blade soaked whisky growl. With his dusky croon and idiosyncratic delivery,Hammond tears into this material with relish, spitting out the often offbeat, stream of consciousness lyrics as if he wrote them himself. Only the slow, ambling blues of “Murder in the Red Barn” would comfortably slot into Hammond‘s existing oeuvre; the remainder push the bluesman into previously uncharted territory with results that reveal fascinating layers of his own interpretive abilities. An experiment whose success will hopefully yield another volume, this partnership of John Hammond andTom Waits brings out the best in both artists’ substantial talents.

Warning: Invalid argument supplied for foreach() in /home/sun103/public_html/wp-content/plugins/feed-them-social/feeds/facebook/class-fts-facebook-feed.php on line 653

Warning: Invalid argument supplied for foreach() in /home/sun103/public_html/wp-content/plugins/feed-them-social/feeds/facebook/class-fts-facebook-feed.php on line 664